How can I get the throttle to go in REV? 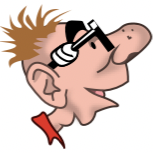